Hello...hello....hello. It's probably an echo chamber in here. Such an incredibly long time since I even looked at my blog let alone posted anything.

There has been lots of changes here. The biggest being I moved to the city! No more country life for me. I do miss my friends but there are other options to see them then living there. I've been here in the city for 18 months now! It's amazes me when I think about it. Seems like just yesterday that I packed everything up and moved on down. People ask me if I'll ever go back...my answer is a rapid "no". I love living in the city. So much to do and so many places to go. If I do get to a point where I decide that city life isn't for me there is a whole world to places to go, although backwards isn't one of them.

Besides all the places to go and things to do I so love the access that I have to ingredients down here. All those recipes I used to pour over and think "if only I could get the ingredients", well I can now. So many options. Near where I work there is a most wonderful fruit, veg and deli place. I will rave over it regularly. Such a wide range of produce and other things. Some cheap, some not so. I do have access to some other cheap fruit & veg places plus butchers nearer to where I live. Although I admit to thinking the other night that with the meat in these butchers being so cheap, and it really is, how much are the farmers getting screwed down. We are in the midst of a dreadful drought and having grown up on the land it suddenly occurred to me that cheap meat, whilst good for my pocket, effects those down the line. I'm not sure what the answer is though. Now I'm on a stricter budget every little saving helps. Plus it does mean that I am still eating meat reasonably regularly. If I was relying on other butchers or the supermarket there would not be much of it on my table. Not that that would be a terrible thing.

I have no idea if I've mentioned quinces here on the blog before. I love quince. When I was a kid we lived on a farm that had some old quince trees. We had to compete with the codling moth for the fruit so we didn't always get a lot of it. I don't really remember what I mum used to do with them either. I know there was jam, perhaps pie. I do remember them being really good. Not that you can eat them uncooked. Perhaps you could...I wouldn't recommend it though. I had bought them at supermarkets occasionally but they were expensive. I found them here, first at Harris Farmm market where I have also bought a lot of produce but mainly from the deli. I've made a number of things from them.

First I used this Stephanie Alexander recipe for Baked Quinces. It was excellent. So very delicious with some yoghurt as a dessert. I also added them as a sweetener to my morning porridge. They would probably be fabulous with an oozy rice pudding. I will admit to not being overly keen on the skin being left on. Whilst you can eat it, I found it didn't soften too much. I guess that was part of the idea to hold the quince halves together but I'd most likely peel them if doing the recipe again. They were sweet and delicious though. 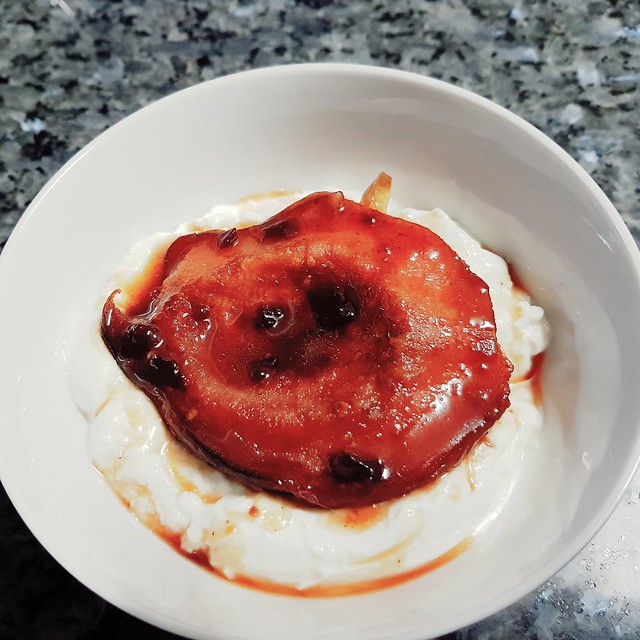 My next foray with quince was Roast Pork with Quinces, Honey & Red Wine. Now, this was good but I'd definitely make some changes to the process if making again. All of the elements were wonderful, although I replaced the parsnips with carrots and chokos. I found that the quince and vegetables ended up a tad over cooked and, s you can see in my picture, almost black with the sauce having excessively reduced down I will admit that I have a very big roasting pan and it would probably been beneficial to be in something smaller. However, I think it would have been best do the pork at high heat and then add the quince and liquid following that. I would also wait a little longer before adding the other veg. Although parsnips are quite a bit more dense than carrot and chokos so that could be one of the reasons for the slight over cooking. It was delicious but there are definitely changes that could be made to make it better. 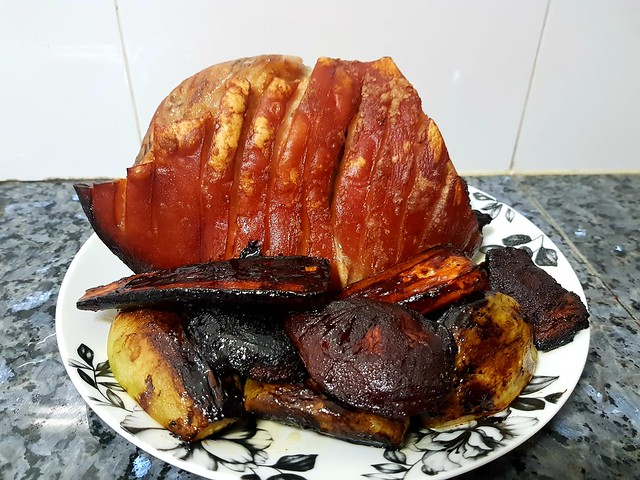 My pièce de résistance with my quinces, although I do have one left, was this Quince Upside Down cake. O.M.G. Amazing. It is a long process. I mean there is the poaching of the quince. The only change I made to the poaching process was that I added a cartouche over the fruit before adding the plate to the top and putting the lid on for part of the cooking too. I didn't like that the cores were left in. I would remove them next time. They were just a pain trying to remove them after they had been poached & cooled. Sometimes quince cores can be difficult to remove and have a hard surrounding to them that really needs to be removed and it was hard since the rest of the fruit was softened. I was very concerned when I was putting the cake batter in the tin and throughout baking that there was too much of the syrup in the pan. I mean it was coming up around the cake batter. However it turned out perfectly. I was surprised but very pleased. I hate to waste ingredients. I work in a larger office now and they are very grateful for any baking contributions that I make to the office. I am happy because I get to bake and I don't have to eat it. Most people were convince there was ginger in the cake. Perhaps the combination of fresh grated nutmeg and the cloves threw them off. I'm not sure. I got some raves for it. Plus I have some left over poached quince. I had some one night with a drizzle of cream for dessert. It was lovely. I'm not exactly sure what I will do with the rest of the left overs...ice cream maybe, rice pudding perhaps. I would highly recommend making this if you can get your hands on some quinces. 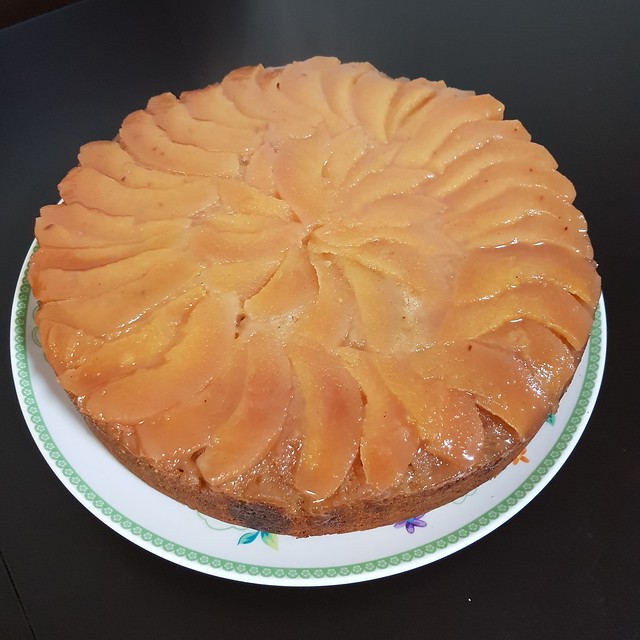 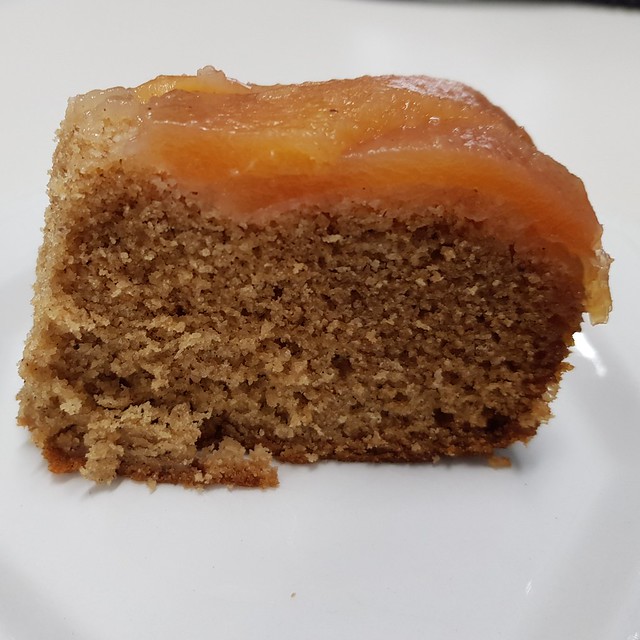