I planned to make this early in the month but I just didn't get to it. For the past two weeks I have been basically kitchenless as I have been renovating. It is so very exciting and photos will be forthcoming. I am actually away this weekend so I decided to make it here. It was a pretty simple dish although I didn't have anything to smash the cucumbers with, or any bags to put them in, so it is just chopped. I would definitely make the fish again but the cucumber was a bit meh. I used salmon instead of trout as that is what I could get. I forgot to bring ginger with me so I put some of the pickled ginger in the marinade along with some green onions.

1. Line a baking tray with baking paper. Place soy, maple syrup, ginger and garlic in a small bowl and stir to combine.
2. Place trout on the baking tray. Pour over marinade , then cover and refrigerate for 1 hour.
3. Meanwhile, for the cucumber salad, peel and halve the cucumbers lengthways, scoop out seeds and discard. Transfer cucumber to a large ziplock bag, seal, then bash with a rolling pin. Using your hands, break into chunks.
4. Add garlic and 2 tsp salt to the bag and shake to combine, then seal, removing as much air as possible. Chill for 15 mins.
5. Preheat the oven to 140 deg and cook the trout uncovered fir 15 mins or until just cooked through.
6. Meanwhile, drain cucumber mixture, discarding liquid, then todd with ginger in a bowl. Serve trout with cucumber salad, top with herbs 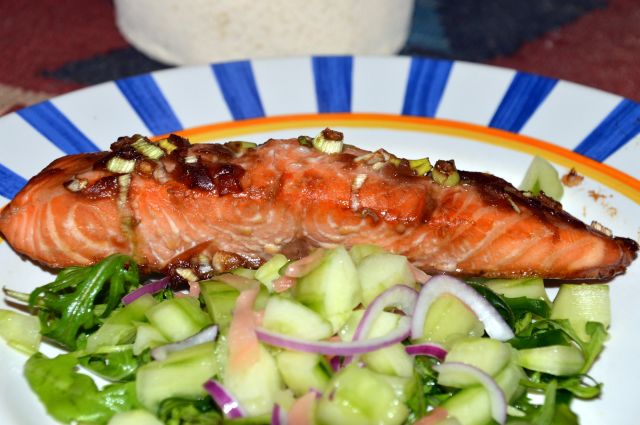