I am not going to post any of the recipes for this tapas "feast" as I didn't really think they were that great. The romesco sauce was nice but I have had better. The patas bravas was good but really how could shallow-fried potatoes with a tomato sauce be bad? This whole thing too me ages to prepare and a lot of multi-tasking while cooking. It also cost quite a bit for all the ingredients and it really wasn't worth it.

I have a new cat, gorgeous isn't she? 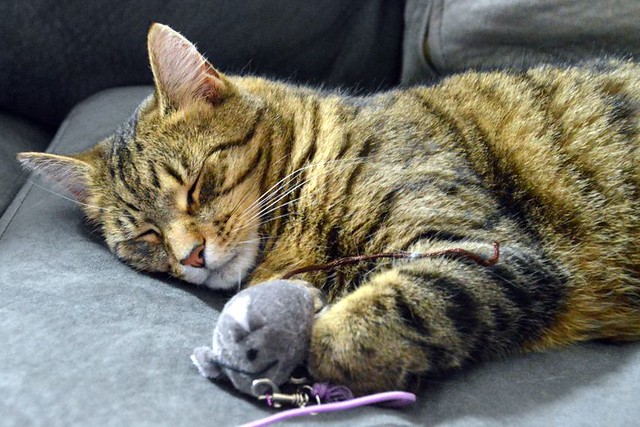 The forums over on Taste.com.au are down at the moment and have been for some time. I know one person looking for one of these glazes so thought that it would be easiest to post them on here. The lovely members over at Taste forums have some fabulous recipes, fingers crossed we can get back on there one day. I will be a bit more diligent about saving after this. I will link both of these recipes back to the sources as soon as it is up and running again.

The first recipe is by forum member ParisLady.

Half a cup of brown sugar
Quarter of a cup of brandy (or whatever spirit you have - I used Gentleman Jack bourbon)
Third of a cup of honey
One tablespoon of seeded mustard
One tablespoon of Dijon mustard
Combine all ingredients well
Use a sharp knife to cut (in a zig zag fashion) around the shank of your ham, about 8 -10cm from the end. Run a knife under the rind around edge of ham, easing the rind off but trying to leave as much smooth fat on the ham as possible.
Score the fat in a diamond pattern and baste ham well. I don't use cloves for my ham - after one Christmas when I bit into a full clove with my mouthful of ham and I don't want to repeat the experience. (I don't think it needs the cloves or that they add anything.)
Cook in a 160 degree oven for two hours, basting every 20 minutes.

The second one is from forum member Traveller.

My Christmas ham Glaze is always Coopers Oxford Seville Orange Marmalade* (1 Jar) and (Beauforts) extra strong Dijon mustard (5 generous Tablespoons, or 4 tablespoons of any Dijon Mustard and 1 of Hot English Mustard).
Combine and stir together over low heat until amalgamated, remove the skin of the ham leaving a thin layer of fat and score it in a diamond pattern, spike the interstices with a clove, then generously brush over the marinade; baste by brushing with additional glaze every 15 minutes while you "bake" the ham.

*Forum member didn't have access to that particular marmalade and just used a regular one.

To anyone who tries them, enjoy and let me know what they are like or pop on over to the forum when they are back online to let all of us know.

This was super easy to make and very tasty. Lovely little morning or afternoon tea dish. The ricotta would also be fabulous for breakfast served on toast. I made half the recipe and I easily got four servings out of it. I have noticed this a lot lately, that the suggested serving sizes are massive. Most of the time I can halve a recipe and still get plenty of food out of it. If it wasn't that bit more difficult I would start quartering recipes but it takes that bit extra work and sometimes when I have taken the time to work it out the end result isn't that great. Some recipes just aren't meant to be made in such small quantities. This one probably wouldn't have been too bad. I find that recipes with eggs are the hardest.

I would recommend making this one. I really enjoyed it and will make it again.