Well, hello there. It has certainly been a while. However, here I am writing again. I haven't really got the cooking mojo thing happening again however I do have the urge to write again. I do have a massive back catalogue of stuff that I have cooked in the last year when I just didn't feel like writing. So I may get on to posting some of those. Might be a bit of a stretch to remember some of them though. Photos are great but they cannot always revive the tastes and smells of something in the distant past. I will try though.

I can't say if it was delicious magazine that lost me or if I was just so ambivalent about cooking etc that I glazed over a lot of very good recipes. I will go back and have a look at the last few months. I found last month's issue buried on my table yesterday with not even a page turned. The new issue came out today. I have dutifully bought it although that has more to do with the absolutely stunning cake on the front cover, oh and the fact that it is the 150th issue, than duty. Although there is a bit of duty to given that I have a standing order for it from my local newsagent and, well, I just haven't gotten around to cancelling it. They put a sticker with my name on it and everything so I just can't say no to that, lol. I do have one thing that I made from the April issue (I think) that I will get posted up next.

My first post in ages is inspired by my desire to share these cupcakes far and wide. It was my birthday last week. I'm not saying how old because, well, I don't want to be this old. Unfortunately, I didn't really have a choice. Let's just say it was one of those 0 birthdays... sigh. I did have a nice day. My boss & his wife took me to lunch, my grandparents came along too. I received some lovely flowers, a few lovely text messages, fabulous forum messages and facebook posts. Since there wasn't much of a celebration I decided that I would make myself some cupcakes as a "happy birthday me".

I loooooove snickers bars. I mean really. I don't buy them because if I do I inhale them. My doctor tells me it is okay to buy them occasionally and suggests eating them "mindfully". Ha ha ha ha. No, they get inhaled. I can plan the whole mindful thing up to the point where I open it and, well, the next thing I know it is gone. I've seen all sorts of recipes over the years for snickers cupcakes and they usually involve the use of the actual snickers bar in them at some point. But, yeah, that just isn't going to happen here. They would be inhaled before going any where near being chopped up or melted down for use in cupcakes. So I decided that I would use all the elements and see what came out. So what did I do. I made chocolate cupcakes, cut a hole in the centre and filled with dulce de leche, iced with peanut butter buttercream and then sprinkled with chopped nuts and grated dark chocolate. **drool**

I wasn't sure on a chocolate cupcake recipe. I sometimes use my regular cake recipe but it makes such a big mix. Anyway I googled and the top result was a taste.com.au recipe from an old Notebook magazine issue (I miss that magazine). They were really easy and quite tasty. Possibly not quite as chocolatey as I would have liked but they were a nice texture, slightly dense which was perfect for my purposes. I also liked that they weren't overly sweet since there was plenty of sweetness to come. I would definitely make these again, oh actually I already have.

Combine the chocolate and water in a small saucepan over low heat. Cook, stirring, for 5 minutes or until chocolate melts and mixture is smooth. Remove from heat and set aside to cool.

Use an electric mixer to beat the butter and sugar until pale and creamy. Add the eggs, one at a time, beating well between each addition, until just combined. Add the flours and cocoa powder and stir until just combined. Add the melted chocolate mixture and stir to combine. Spoon evenly among the lined muffin pans. Bake in preheated oven for 20 minutes or until a skewer inserted in the centre comes out clean. Remove from oven and transfer to a wire rack to cool.

Next was the dulce de leche. I had this in the fridge, I have had it in the fridge forever. I made it in my thermomix, ages and ages and ages ago. I was kind of surprised that it was still okay. There was a bit of crystalised sugar on top but not bad and it still tasted great. Plus, not dead so it was fine, lol. I cannibalised a few recipes online for this one. Good thing I scribbled it down as I went, I don't always do that.

Place all in the bowl, 45 - 50 minutes; Varoma; Sp 5.
Use the basket on lid for evaporation without splatter.

Now, for snickers, you obviously need nuts and what better way to get that in than peanut butter buttercream. This turned out nice and creamy, not too sweet.

Use a knife to cut a cone shape into the cupcake. Fill that with dulce de leche, pipe buttercream on and then top with grated chocolate & chopped nuts. 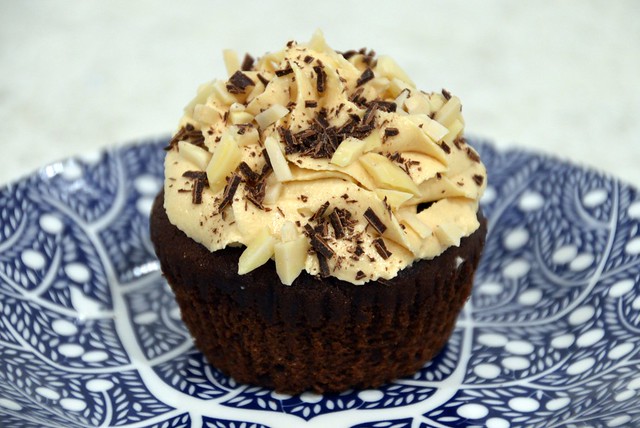 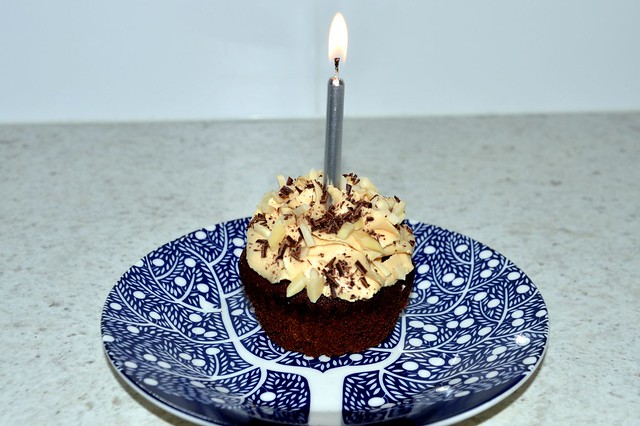 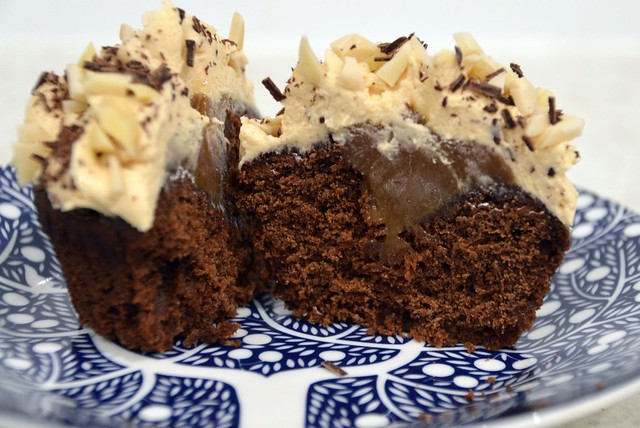